Pathway analysis becomes an important element in GWAS. Broadly, it involves SNP annotation, such as Variant Effect Predictor (VEP), gene analysis such as VEGAS2, and gene set analysis. Visualisation of a particular region has been facilitated with LocusZoom, while network(s) from pathway analysis via gephi or Cytoscape, which uses genes and a collection of edges, directed or undirected, to build a network. Aspects to consider include part or all databases, individual level genotype data vs GWAS summary statistics, computing speed, with and without tissue enrichment. 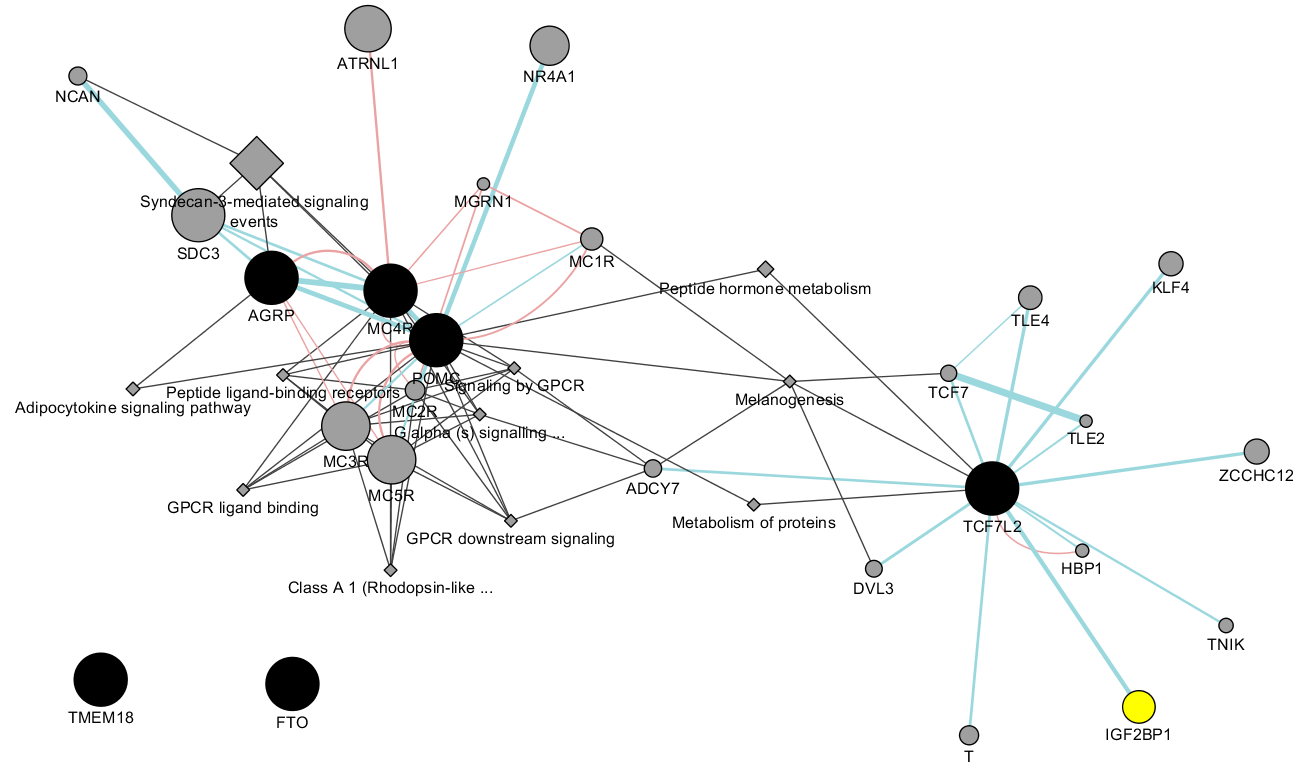 The full functionality of the pipeline requires availability of individual software for pathway analysis, whose requirements should be fulfiled, e.g., Matlab for MAGENTA. For PASCAL, minor changes need to be made with Pascal in that by default DIR is where it is called so it needs to be changed into PASCAL installation directory and that instead of the relative path jars/pascalDeployed.jar an absolute prefix should be added. Although PASCAL was designed to handle LD with many SNPs, it fails to run when very large number of SNPs are involved in which case it would help to shorten the list. The current version of pipeline also uses DEPICT from the GitHub but with data in the release version from the Broad, https://data.broadinstitute.org/mpg/depict/. Under Python 2.7.x, amendment needs to be made from sort() to sort_values() in src/python/depict_library.py as described in http://pandas.pydata.org/pandas-docs/stable/generated/pandas.DataFrame.sort_values.html. It may also complain about too few background files in depict/data/backgrounds so it is necessary to remove the relevant directory and have a repetitive run. Finally, it is useful to install XpdfReader or ImageMagick to produce Excel workbook. Some information on job scheduling software as with R is given at https://github.com/jinghuazhao/Computational-Statistics.

On systems supporting modules, they can be loaded before hand but it is possible that appropriate module is loaded seamlessly, e.g.,

NB “$@” enables matlab to be called as usual. Alternatively, the module commands can be part of pwp.ini which is sourced with pwp.sh.

The pipeline itself can be installed from GitHub in the usual way.

The pipeline requires users to specify both software and database to be used, which is now through pwp.ini in the working directory.

The syntax is then

The input will be GWAS summary statistics described at https://github.com/jinghuazhao/SUMSTATS in that order without the header,

The output will be available from individual directories named after the software you choose, and optionally in case all software are used the output can also be an Excel workbook containing combined results.

For DEPICT databases, it is possible to call netowrk_plot.py to generate network diagram and perform cluster analysis.

The bmi.tsv.gz and ST4 from https://github.com/jinghuazhao/SUMSTATS can be called as follows,

You can make changes to the configuration files for each software in their own direcories. See also software-notes on how to set up VEGAS2, as in vegas2v2.sh.

The work drives from comparison of software performances using our own GWAS data. The practicality of a common DEPICT database to all software here was due to PASCAL developer(s). At the end of our implementation it came to our attention that similar effort has been made, e.g., DEPICT-pipeline and other adaptations.